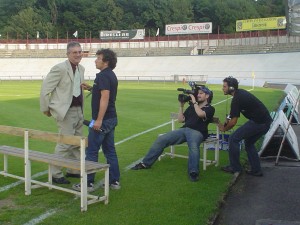 Fonded by Christian Michelis, lawyer Luc Misson, Thierry Marcadé and Jean-Luc kit, the N.F-Board is a non govermental association declared on December 13th, 2003 in Liège, according to the Belgian law of June 27th, 1921 on the ASBL and this day recognized by the United Nations Organization (UNO)with Ecosoc agreement. Members of N.F-Board are football teams representing entities and populations with strong cultural identity but not recognized as state. At the origin of the foundation of the N.F-Board is outlined the project to organize a World cup of a new kind, with for only motivation the ball, leaving aside the political and financial stakes. ” The geopolitics of the football is not the purpose ” confirms Jean-Luc Kit ” we like speaking about territory geographically or sportily isolated ” and his slogan means to say that ” if it is beautiful a world which plays (slogan of FIFA) it is even more beautiful if everybody plays “. To thwart the political recycling of the event stays the guideline
from which do not disengage the founders, even if the attempts do not miss. “One tried to instrument us, during the first edition of the Viva World Cup in 2005, planned in the Turkish republic of Cyprus the North. We cancelled the tournament. We are very sensitive on the subject. Since the politics or the religion override the football, we withdraw “. The only motivation of the N.F-Board stays that of the ball game. ” By playing football the purpose is not to change the geography of the planet, but to move closer to people when everything is made to separate them “. Actually the cultural dimension of the tournament of footballViva World Cup takes all its sense so much the wealth of the cultural diversity allows to generate exceptional intercultural meetings.